Moms Rally for Kids in Gumball 3000

Two moms. A hot pink Porsche. A road rally from Miami to Ibiza, Spain. It sounds like a movie, right? That’s one of the reasons why MSL is enthralled by this story of two daring moms with seven kids between them on a mission to raise money to help make a better life for kids in Ethiopia and have an incredible adventure while doing it. 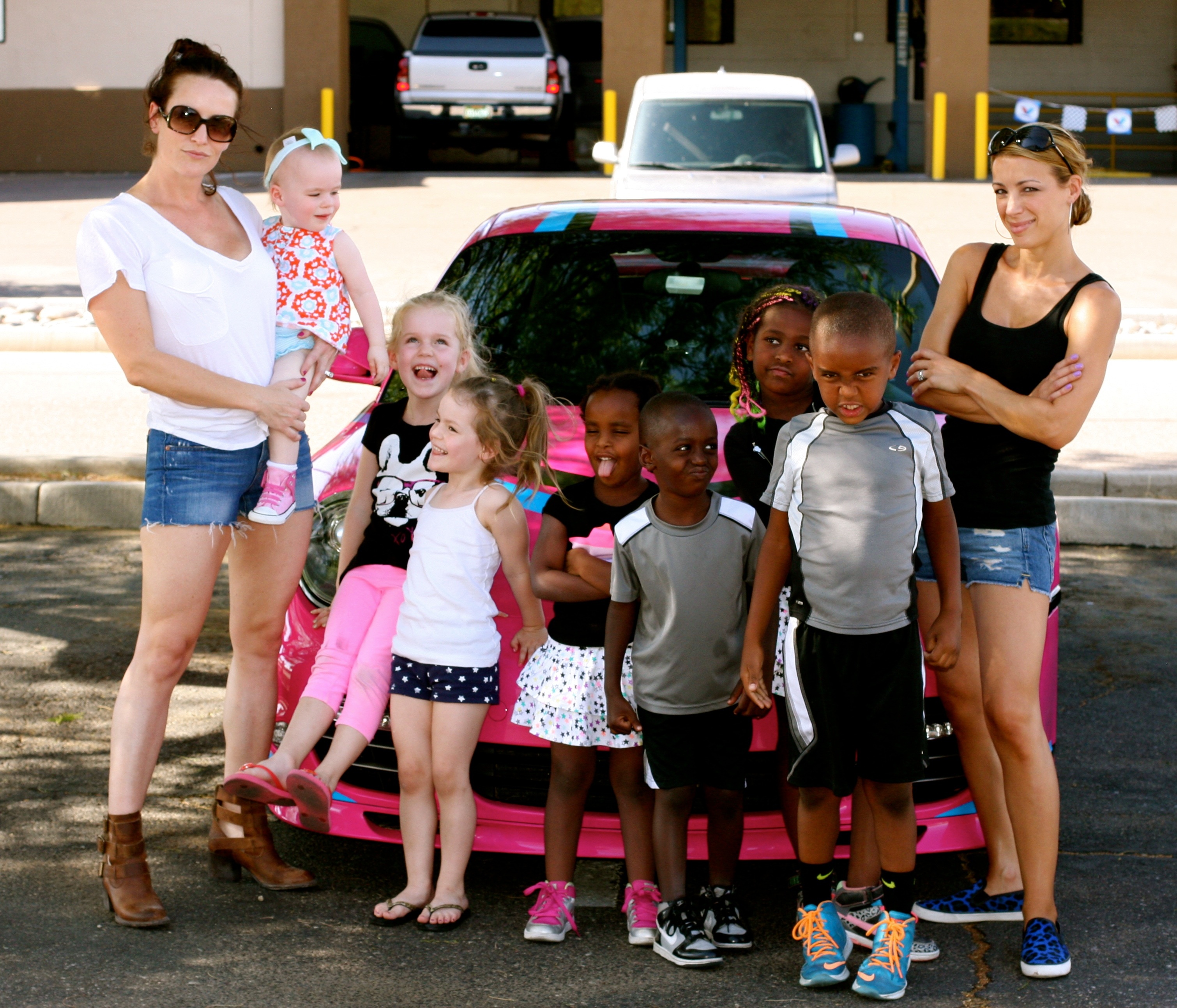 Katie and her three girls, and Keri with her two boys and two girls say good-bye and get ready to hit the road.

This June, Katie Sellers and Keri deGuzman signed up to drive in the Gumball 3000, an annual road rally created in 1999 by former racing driver and British entrepreneur Maximillion Cooper. Celebrating its 16th rally, the Gumball 3000 has evolved over the years into a week-long festival hosted by cities around the world (the rally route changes each year) and includes concerts and car shows that draw huge crowds of people and fans. The rally is also televised on MTV and BBC, reaching over 60 million households globally, and the list of brands and celebrities involved is long and distinguished. 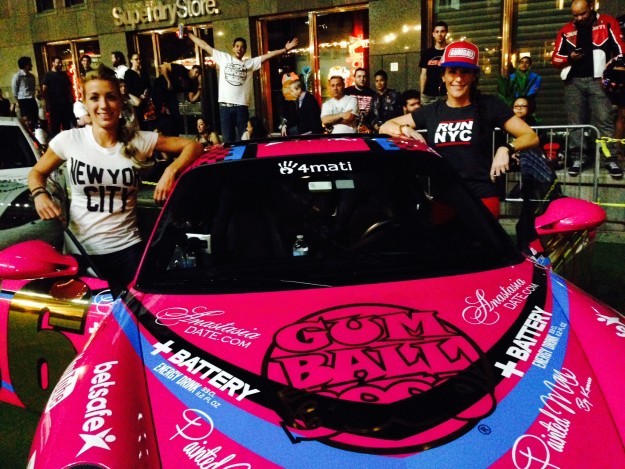 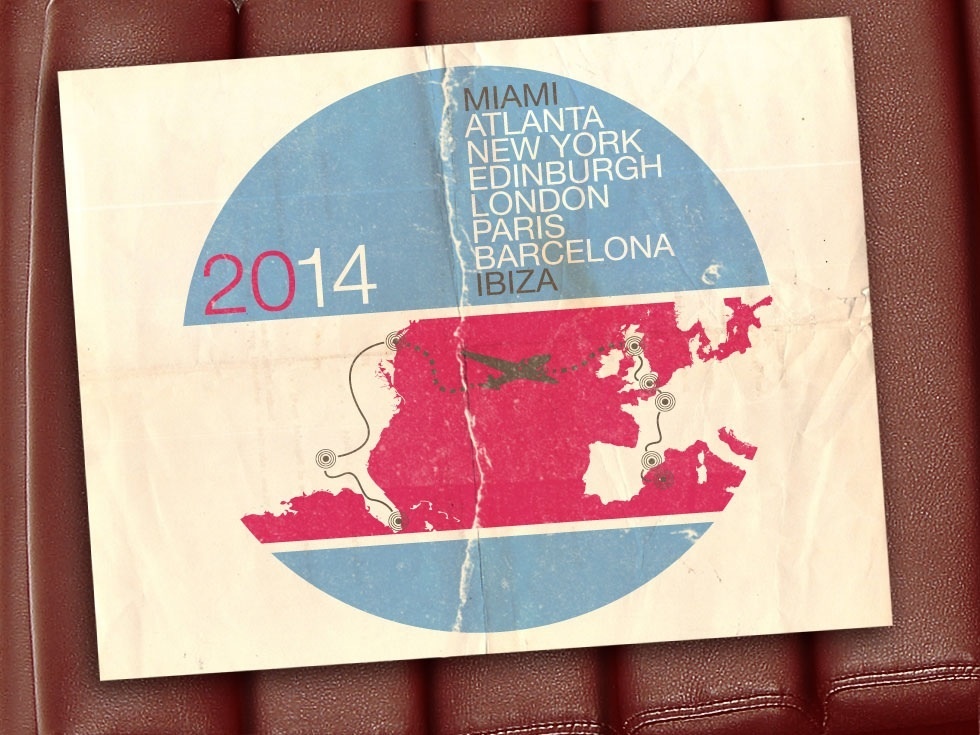 Starting in Miami, Keri and Katie drove to Atlanta, then New York where they (and their car) boarded a jet to cross the Atlantic. They landed in Edinburgh, Scotland and were greeted by thousands of screaming fans lining the streets as they drove their car to the next destination, London. Then it was on to Paris, Barcelona and finally Ibiza.

Keri and Katie had the time of their lives and told Mom Style Lab all about their thrilling, crazy experience. We are so inspired by these ladies!

MSL: What inspired you to enter the Gumball 3000?

Katie Our husbands were planning on rallying, and we were just going to follow along meeting them at one stop or another, but about three weeks before the start and after trying to figure out all of the logistics, I called Keri and said, “I know this is going to sound crazy but I think we should just do it!” Without missing a beat she said, “Let’s do it!”

Keri Once we decided to actually drive in the rally, I was inspired to take the opportunity to make it a unique fundraiser for our foundation, the 4Mati Foundation. I thought it would be exciting for people to watch wives compete against their husbands and drive 3,000 miles over 7 days through 5 different countries to help 2,000 children in Ethiopia. (To find out more about the 4Mati Foundation or to donate to the cause, visit their website.)

MSL: What was the coolest thing that happened to you during the trip? The craziest?

Katie I think the coolest thing was being the only all-girl team to rally all the way from Miami to Ibiza! The whole thing was crazy on so many different levels, but the craziest was pulling onto Regent Street in London and having 500,000 people waiting for you, taking pictures and yelling, “Rev it!! Rev it!!”

Keri The coolest thing was when we arrived in Scotland after an overnight flight from New York and stepped off the plane to find our cars fueled up and waiting for us on the tarmac at Prestwick Airport. The craziest thing was finding out they had shutdown the airport so we could all take turns racing our cars down the runway. I opened that pink baby up and ripped down the runway screaming!! 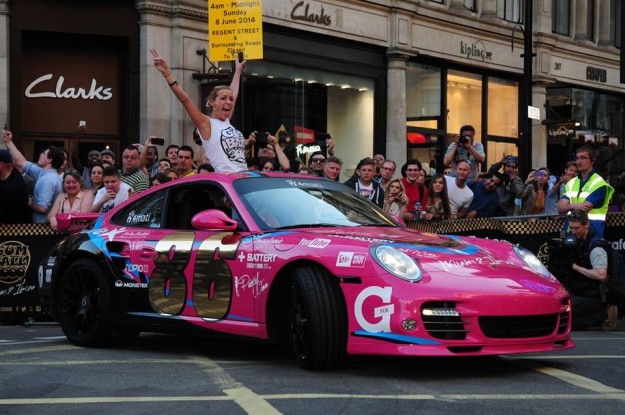 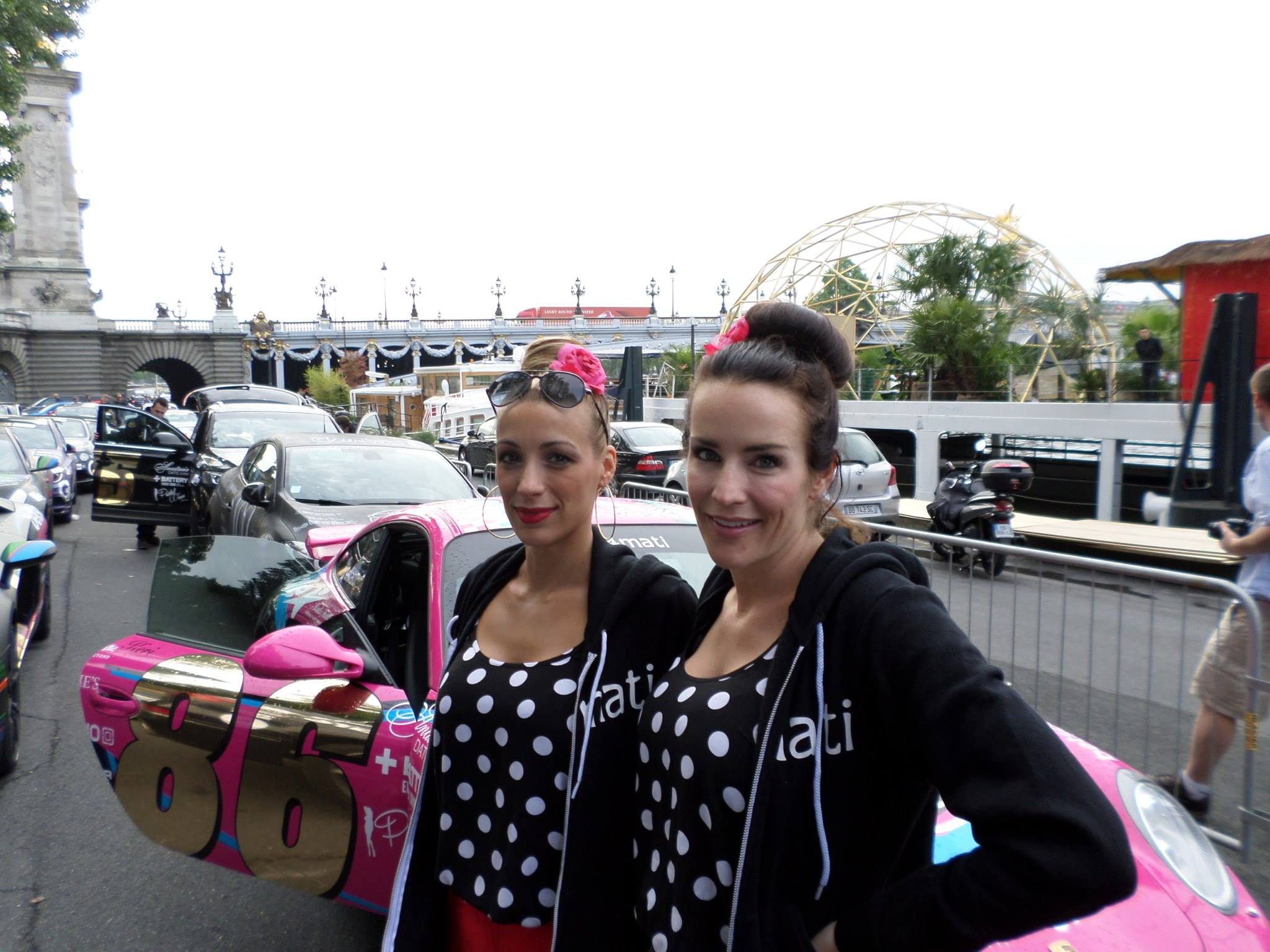 At the Circuit d’Albi in France getting ready to leave for Barcelona.

MSL: What was your most thrilling moment while racing?  Your biggest challenge?

Katie The most thrilling was being on the track Circuit d’Albi. My husband drove the track with me as a passenger and that was NUTS!  I really had to let go of the control and just hold on! I think the biggest challenge was being in such an intense situation, driving fast in other countries while not being able to speak the language not knowing where exactly you are going and for such long days (usually anywhere from 8-12 hours). But I really do think the Gumball is something you do to challenge yourself, and if you haven’t you didn’t do it right.

Keri The most thrilling moment was after a long day of driving being welcomed into each destination to hundreds of thousands of people cheering and wanting pictures of the car! The biggest challenge was the long 10-12 hours per day of driving, less than 30 minutes to get ready to go out at night, sleeping only 4 hours each night, and getting up early to hit the road. Exhausting, but the thrill of getting to each destination was worth it!

MSL: What was your favorite city on the route and why?

Katie Edinburgh, Scotland. The people were amazing and the backdrop was fantastic. To see all of these new, powerful cars juxtaposed against such a historic place was breathtaking and really made me realize what a short time we have on this planet and to really take it all in when you can.

Keri I had two favorites. Scotland was beautiful because of its breathtaking landscape, historical architecture, and warm hospitality of the people. However, Ibiza was unbelievable because we were greeted at the finish line by thousands of passionate Spaniards and the ending party was insane!!! 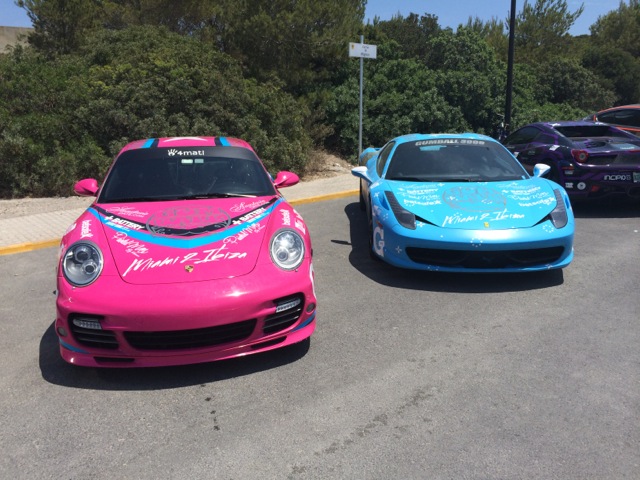 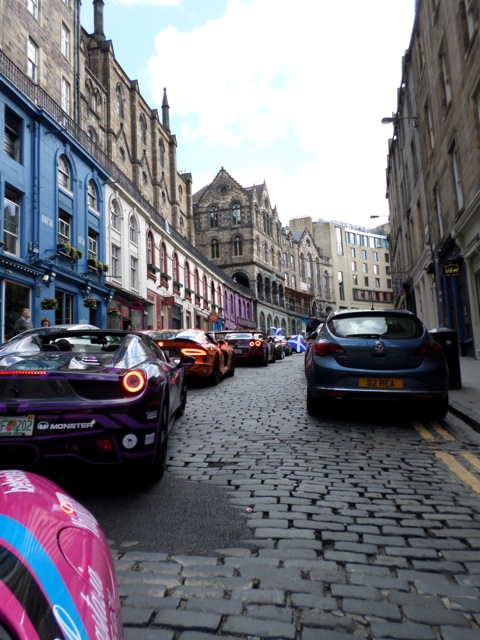 MSL: Any other great stories or interesting happenings to share?

Katie All of the Gumballers were amazing and it is truly a family. To meet all of these people from different nationalities and get a chance to really know them in a way you couldn’t in any other situation was priceless.

Keri My husband Brian and I celebrated our 10-year wedding anniversary when we arrived in Ibiza on June 12th! Our honeymoon was a month-long driving trip throughout Europe, so to be on the rally with him driving through Europe brought back some fun memories!

MSL: Your husbands were part of the race as well – what did they think of you being their competition?

Katie They were always supportive, but they were shocked at how “badass” we really are!

Keri Brian was very excited that we decided to drive, but worried that my East Coast driving would come out and give him some hard competition!! Both husbands were very supportive with helping us get the car ready, making sure we had enough room and lugging all of our overstuffed luggage, plus making sure we were driving safe. 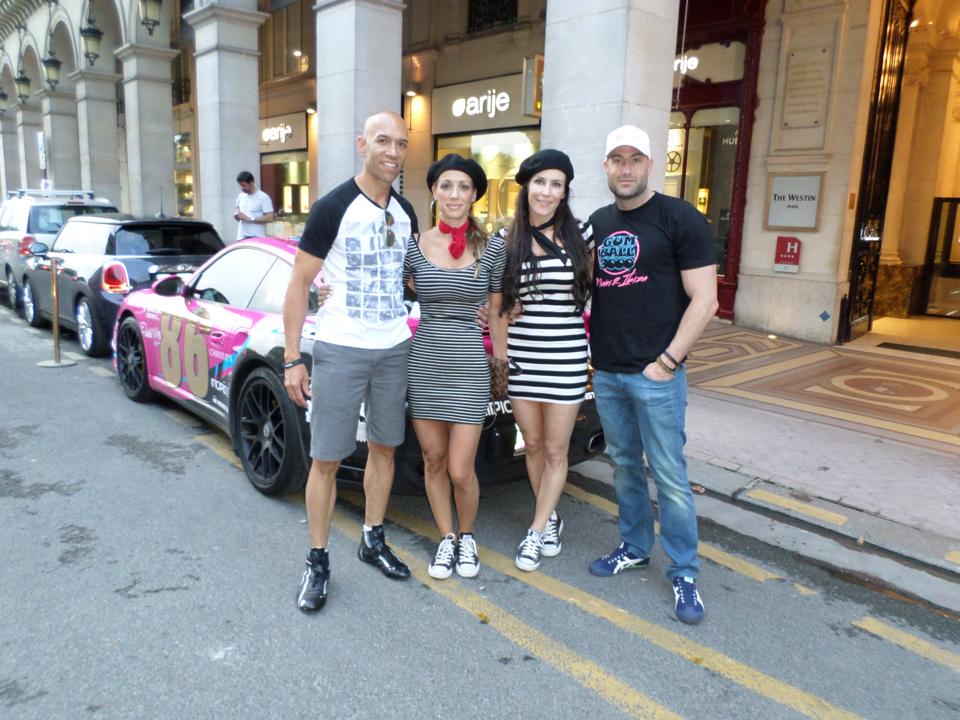 Keri and Katie with their husbands in Paris.

MSL: You were racing to benefit the 4Mati Foundation – what were the results?

Keri The rally was a huge success and we were able to raise $50,000 for the 4Mati Foundation! In addition, the proceeds from the sale of the Corvette our husbands drove will be donated as well! We are so thankful for everyone’s support — this will truly make a difference in the projects we are completing for the children in Ethiopia.

MSL: Tell us what your kids thought of you participating?

Katie My three girls loved it! And now we have a pink Porsche out of the deal! I am hoping what resonates most for them is that girls can do whatever the boys can do!

Keri My kids were so into the rally and wanted to know every detail when we called! I think they wore the Team 4Mati Gumball t-shirts we had made to school everyday we were gone. Most importantly, they were so proud that we were doing the rally to help raise money for the kids in Ethiopia! 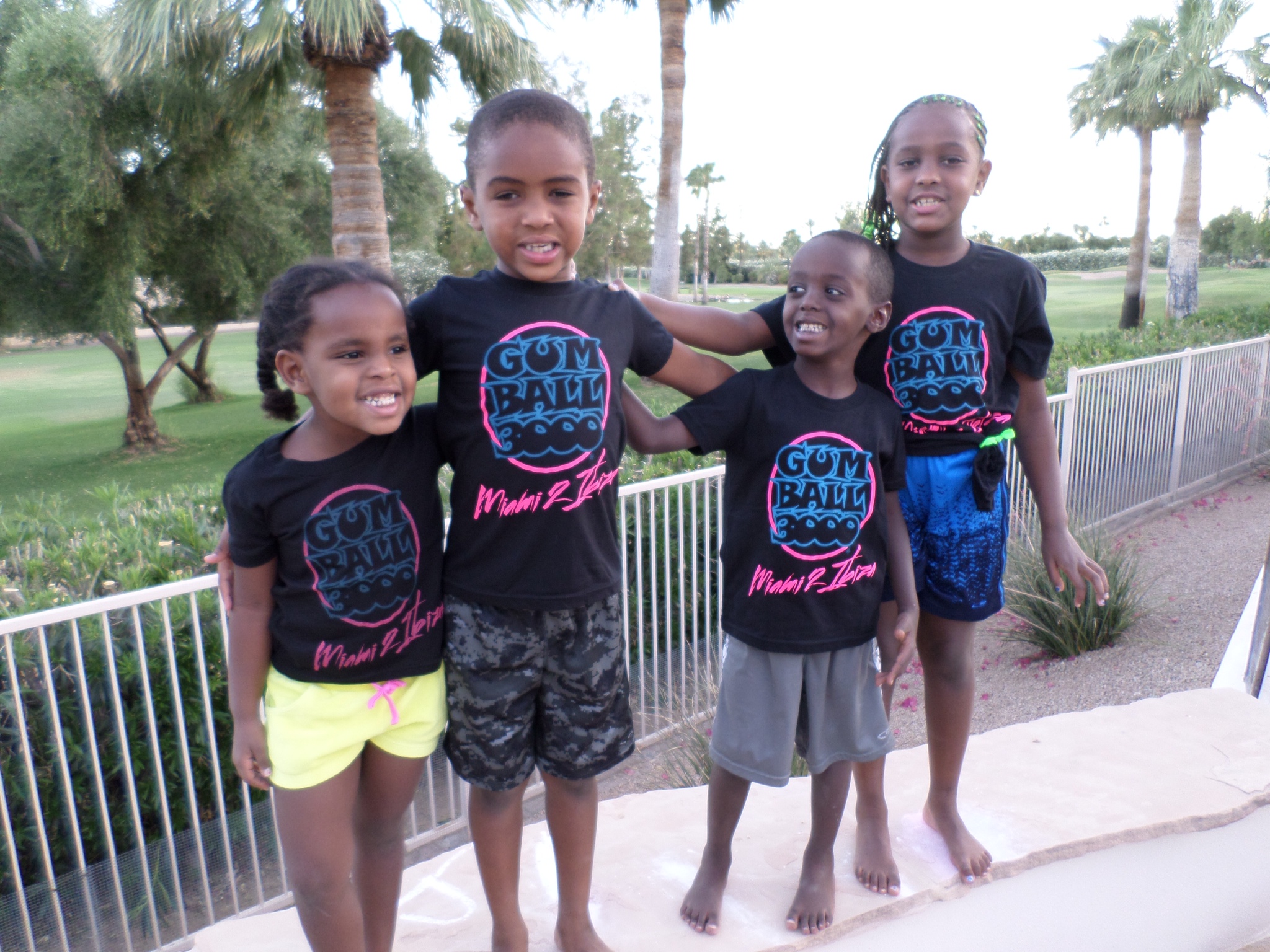 The deGuzman kids showing their support!

MSL: Any plans to race again?

Katie For sure!!  I think I am addicted!

Keri Thinking about it!