From Design to the Golden Globes: The Making of a Red Carpet Gown 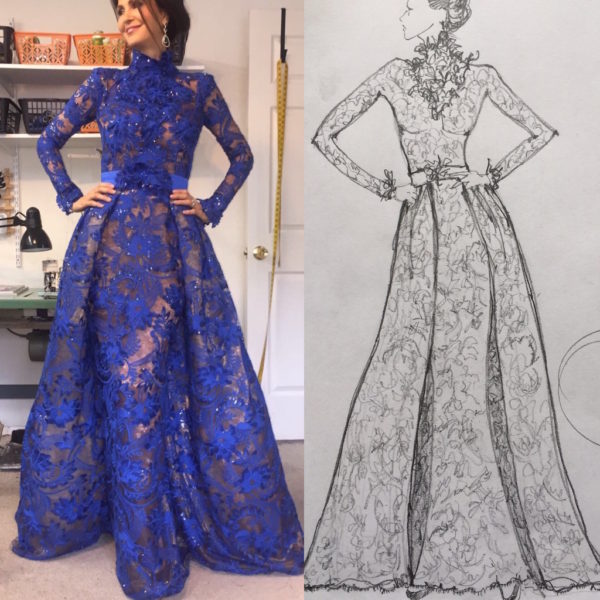 Last year, our Mom Muse and friend Micheline Etkin took us behind the scenes at the Golden Globes for an insider’s look at the star-studded event. This year, the mom of three and grandmother of one gave us not only a peek into the red carpet experience, but also a look at how her custom gown was created for this A-list Hollywood awards ceremony. We have all the details, courtesy of Micheline and her stylist, who also designed her fairy-tale gown, Oscar De las salas!

In addition to being a model with The Agency Arizona, Micheline’s primary focus is on philanthropy, including serving as an ambassador for the International Children’s Palliative Care Network (ICPCN). By attending the Golden Globes, she is able to network and raise awareness about the important work being done by the ICPCN and other charities she works with. While on the red carpet, she was interviewed by a long list of media outlets and talked about how the ICPCN is helping sick children around the globe and improving their quality of life. 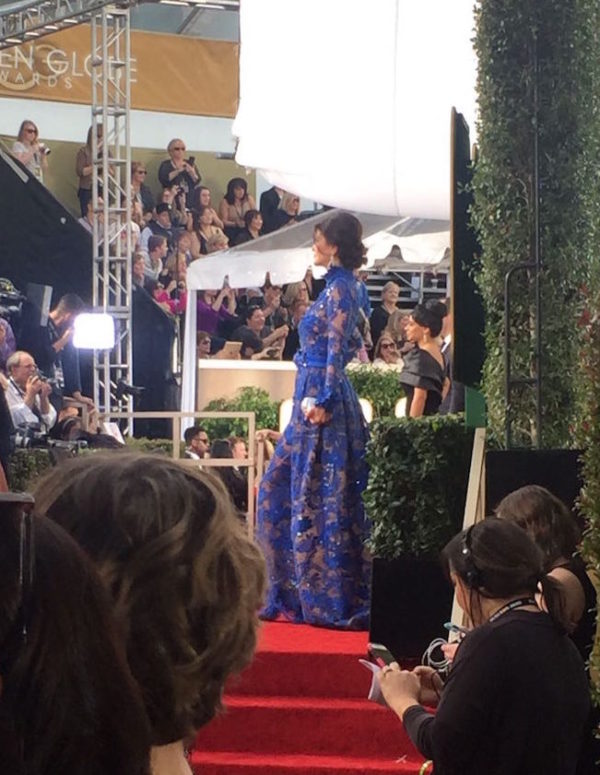 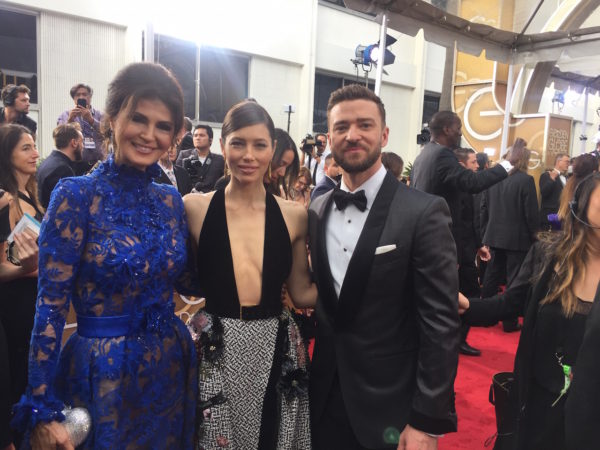 Hangin’ with JT and Jessica Biel. 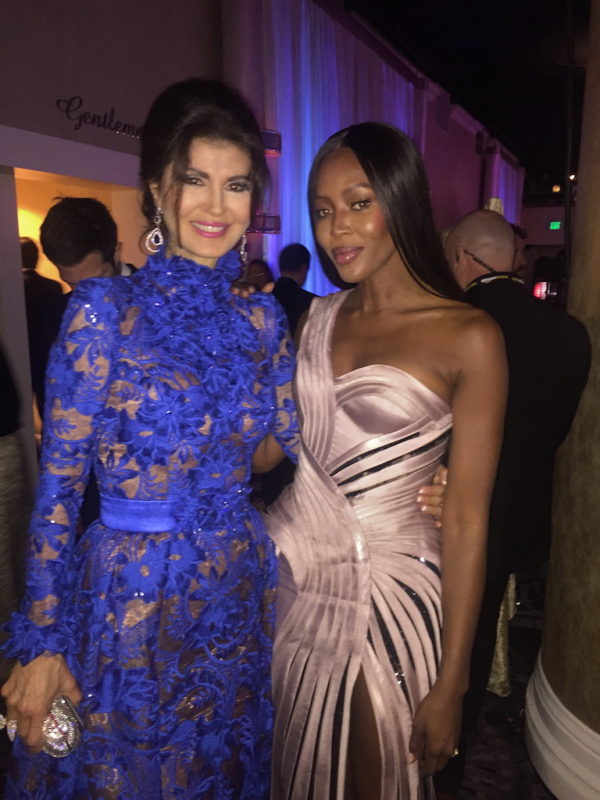 On to Micheline’s gown. Her stunning custom creation, not surprisingly, garnered a lot of attention at the event. From the bold hue and belted waist to the exquisite french lace and tailoring, the gown was perfection on Micheline and a standout on the red carpet. Of course, a gown like this is not created overnight. Micheline and Oscar began brainstorming and envisioning her look not long after last year’s Golden Globes, and he promised his friend that he would design the perfect gown for her red carpet appearance. 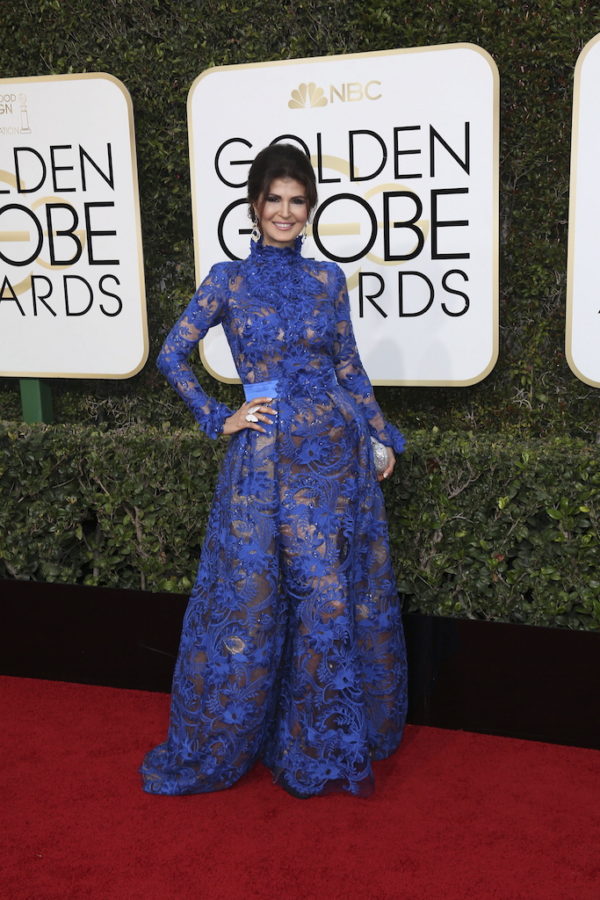 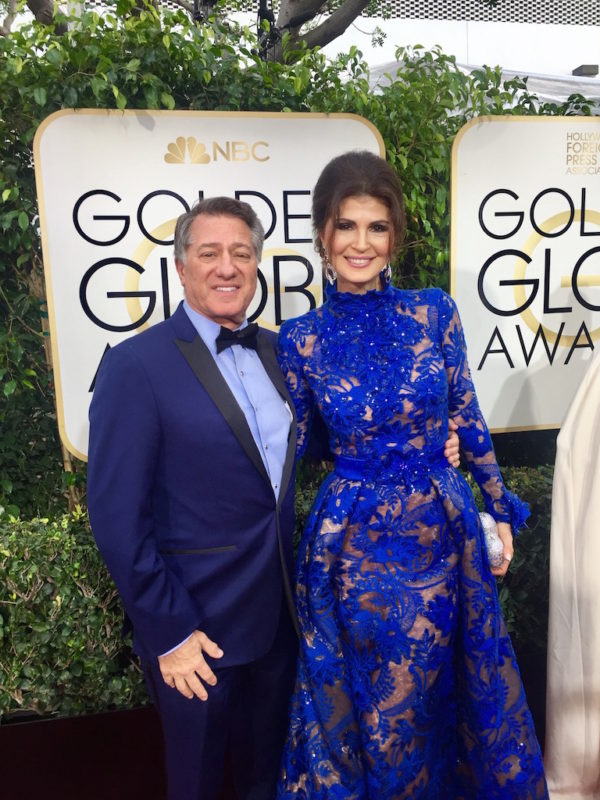 Micheline and her husband Bruce. 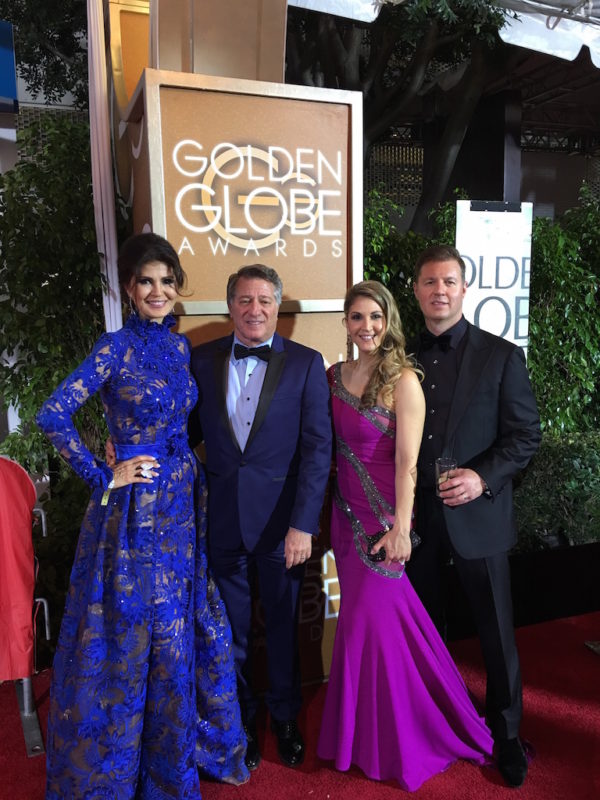 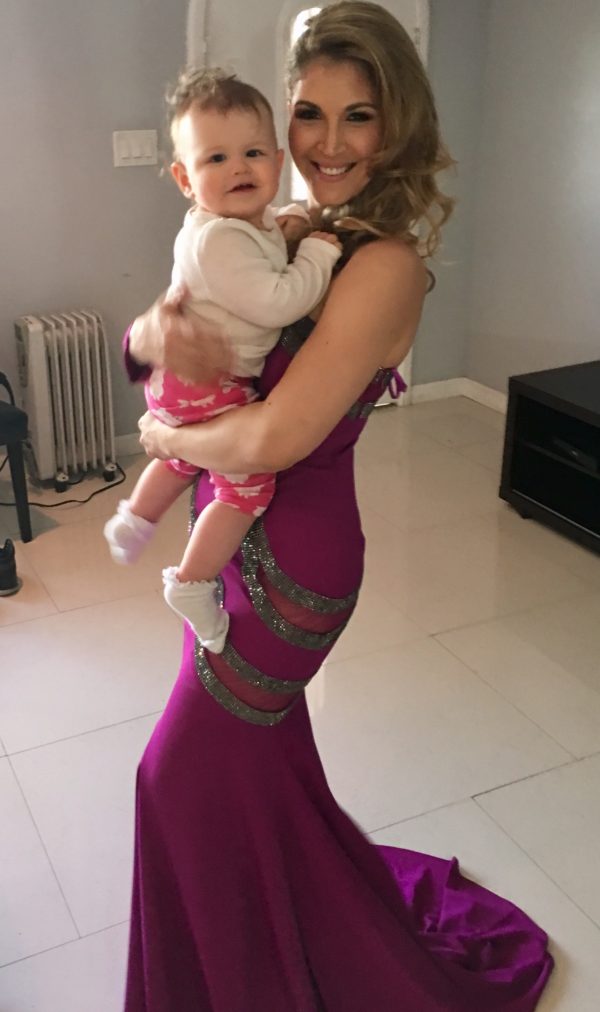 Caroline and her darling daughter Madilyn before leaving for the event.

Oscar shared with us that the thought of designing a special gown took him back to his childhood in Barranquilla, Columbia when he used to sit next to his mother and her favorite seamstress as they worked on sketches for custom clothing. Around 12 years of age, he began participating in the process and would often even take over the design of the garment. Design in his blood, Oscar went on to graduate with his Masters in Interior Architecture from the Universidad de Salamanca in Spain. During his lengthy career in the world of fashion and design, he has been a model, set designer, fashion critic, fashion show director/producer, writer, emcee and stylist. And now, he can add “fashion designer” to his resume, bringing his career full circle.

Oscar worked closely with Micheline and Tamara Crawford of Tamara Alterations to design the dream gown. Tamara happened to have the cobalt blue french lace in her studio that would eventually become the “Micheline by Oscar,” as the gown has been dubbed. 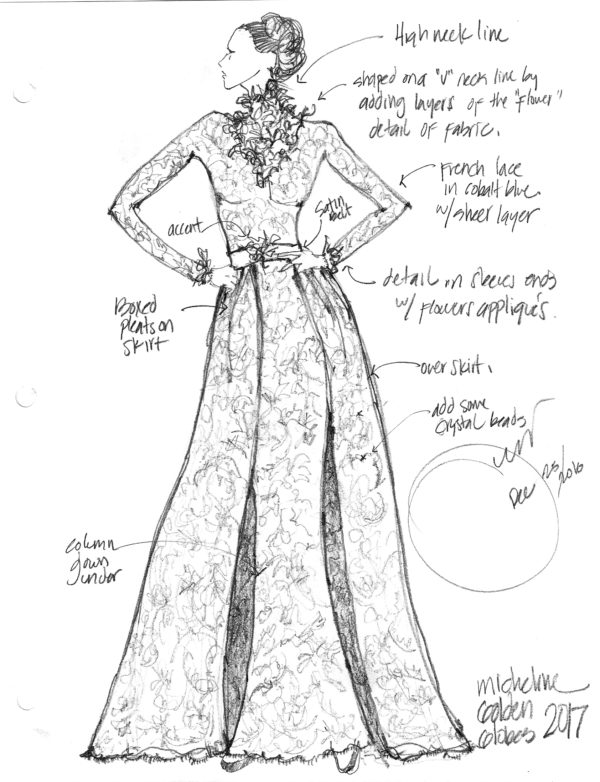 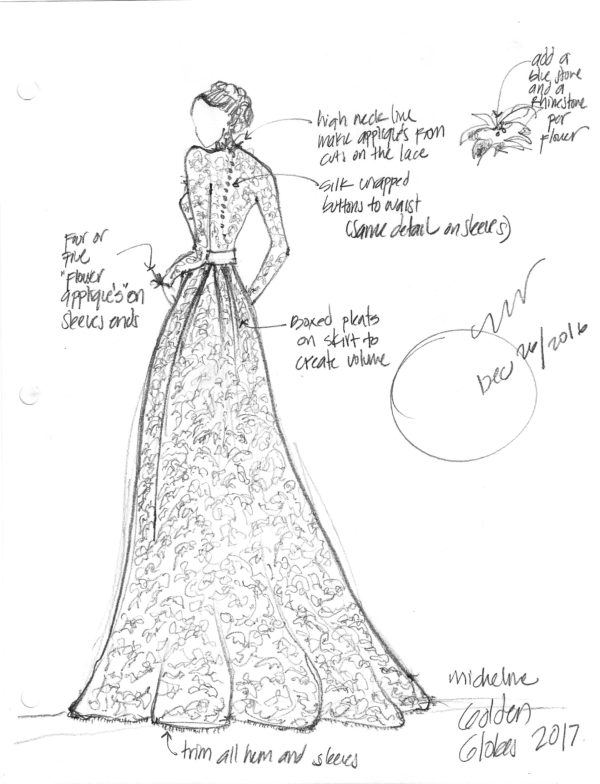 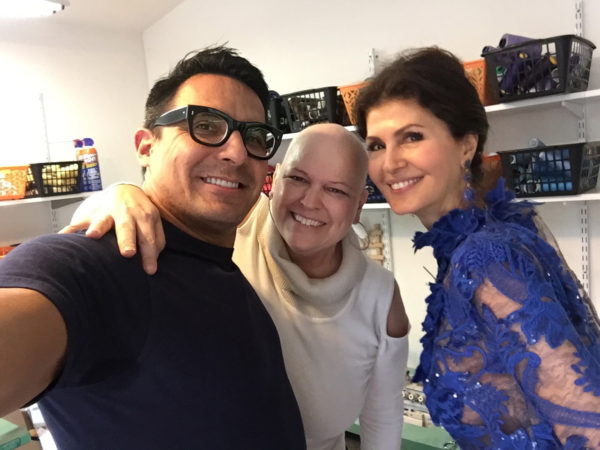 Oscar, Micheline and Tamara in her studio. 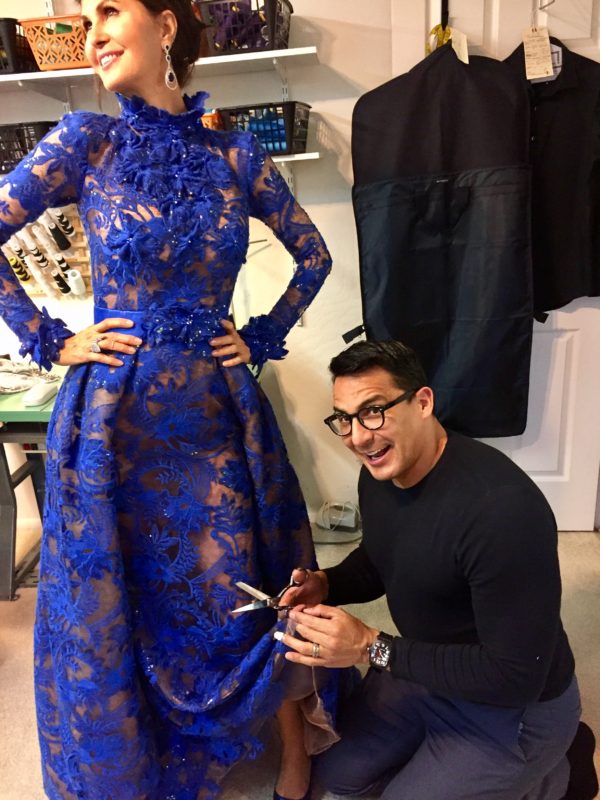 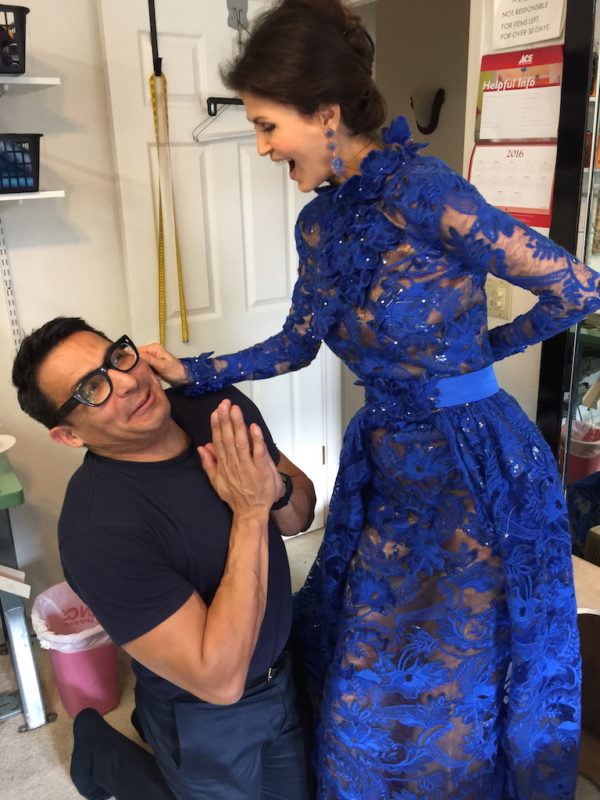 Putting the final touches on the gown and overall look.

So, we had to know and asked Oscar if we’d be seeing any more gowns designed by him in the future?? He told us that he has two solid opportunities in the works and others rising, but he’s going to take it one design at a time, as the process has always been “a very atelier-oriented exercise” for him. Plus, he has other responsibilities filling his plate at the moment. Oscar states that he’s not planning to launch a collection anytime soon. However, he did say, “Unless there is an established investor with the required/needed sustainable support in all areas — that would be an offer that is hard to pass up!” We’ll be watching! 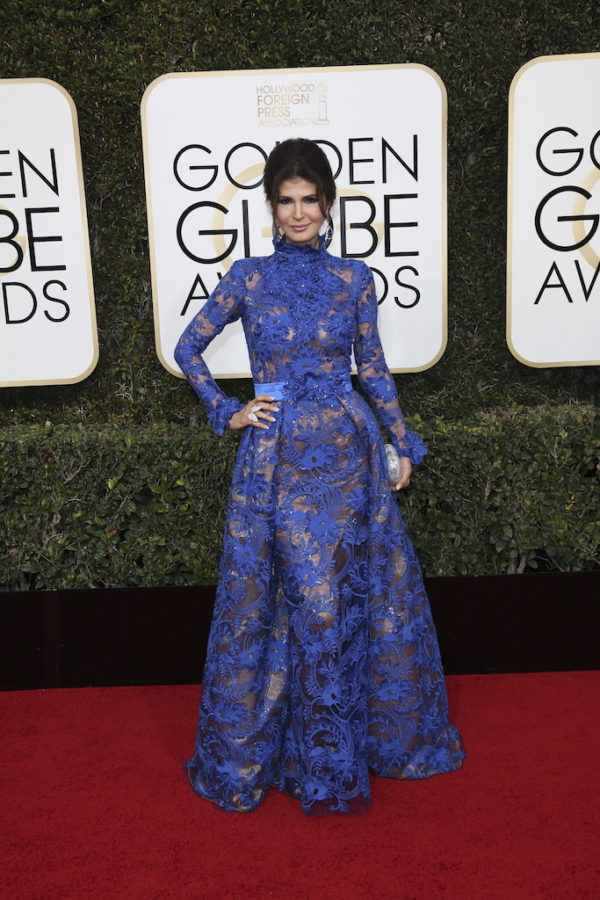 One response to “From Design to the Golden Globes: The Making of a Red Carpet Gown”