In January, we found out that our daughter at only eight years old has ulcers due to an extreme overgrowth of bacteria and yeast in her system. Wow. We’re not sure what caused the problem, as we have always eaten healthy at home with a focus on simple, whole organic foods, and kept sugar and processed foods to a minimum. She tested negative for food allergies, but it’s quite possible the issue stems from a food sensitivity that over time became an issue. She had been dealing with a nagging stomachache and sore throat for a few months, and we were in and out of the pediatrician’s office for strep tests (you know the drill!), when the situation elevated to the point where we took her to see a pediatric GI specialist. After an endoscopy and a diagnosis, the specialist started her on a series of medications and the “8 offending foods” elimination diet for three months to get her gut issues under control. If you are familiar with this approach, you know it means eliminating dairy, wheat/gluten, eggs, soy, peanuts, tree nuts, corn (and corn additives which often mean hidden sugars), fish and shellfish. So many kids (and adults!) have GI issues these days, plus allergies and food sensitivities… I know that other moms must be facing the same challenge I have for the last few months — finding “total elimination diet” recipes and food ideas for their kids.

Thankfully, Christina is game to try most things and not a picky eater or that would be a whole other level of challenging. She already preferred her food on the plain side without butter, sauce or salt, since that is how I cook (with the exception of marinara! Gotta love a yummy robust tomato sauce, so that is missed for the time being.) There are a number of sites that feature elimination diet recipes, but most are eliminating just dairy, just gluten or dairy and gluten, but not eggs, etc. — they aren’t total elimination (which means no honey, agave nectar, baking powder or yeast — it’s a 22-page list of items to eliminate!). Shopping for prepared foods or easy snacks at Whole Foods is even difficult, but doable, once you know what to look for on the labels. Needless to say, I’ve been doing a lot of experimenting in the kitchen and have developed some of my own recipes that eliminate everything on the list. I will be sharing those that Christina has given the thumbs up as we continue on this journey over the next few months, as well as some tips on food and snacks you can easily throw together or buy. Please note that I am a mom, not a doctor, dietician or nutritionist, so am not trying to give advice, but rather just pass on my own learnings in the kitchen.

On the bright side, our entire family is eating healthier, plus Christina and I have been having fun together experimenting in the kitchen. She loves pancakes for breakfast on the weekends, so this was one of the first recipes I worked on and after a few versions, created this one. Even my hubby gave these a thumbs up! 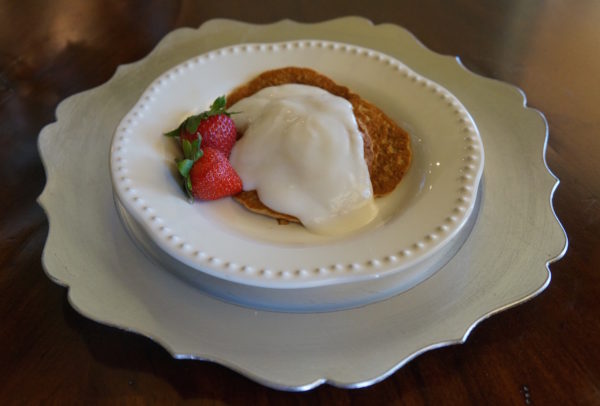 Add to liquids and whisk together.

Spray griddle lightly with olive or coconut oil and heat to 350 degrees. Pour batter and flip when bubbles appear all over pancake. (If you don’t have a griddle, I highly recommend this one by Bella — perfectly cooked pancakes every time!)

FODMAP version of Pure-fect Pancakes:
The FODMAP diet focuses on a large group of dietary sugars called FODMAPs, which stands for Fermentable Oligo-saccharides, Di-saccharides, Mono-saccharides and Polyols. These sugars are often poorly absorbed in the small intestine and ferment causing bacteria and gas. After a few months on the elimination diet, Christina’s doctor switched her to the FODMAP diet, which combined with the right antibiotics got rid of her bacterial overgrowth. She has been instructed to remain on the FODMAP diet as long as possible to maintain her GI health and balance.
– Substitute the applesauce for 4 bananas. To prep the bananas, cut into chunks, add 2 tbsp. of olive oil or coconut oil, and cook in the microwave for 2 minutes to soften and release the flavor. Then mash with a potato masher.
– Substitute the coconut milk for Lactaid milk.

P.S. Do you have any “total elimination or FODMAP diet” recipes you like? Please share!! Email me at angela@momstylelab.com.